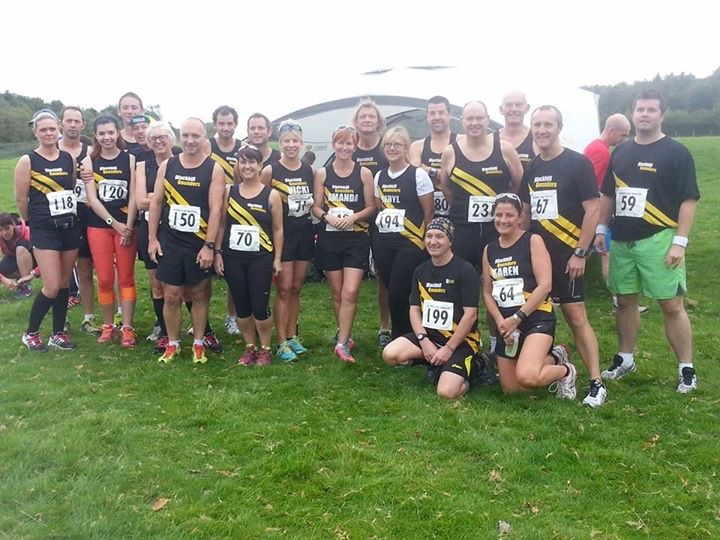 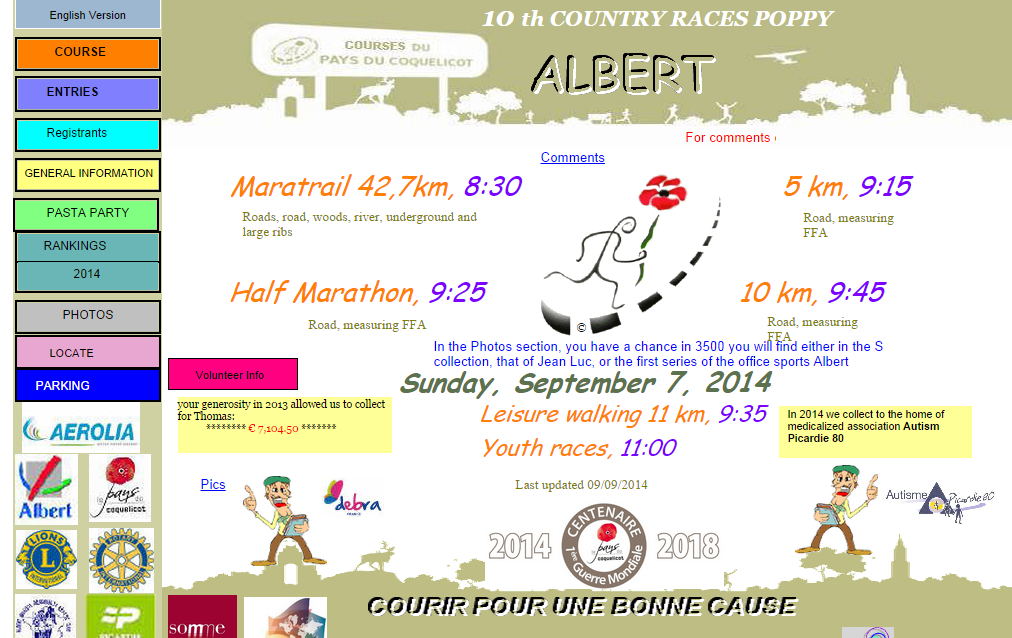 The Somme area of France has strong connections for Brits be it as a holiday destination or for a visit to some of the major sites of the battles which took place in the First World War.  Despite it’s horrific history the area is a beautiful mix of rural village life and some elegant towns and cities.

I’ve ran the Somme Marathon 3 times before but this year it promised something different, a Maratrail in other words an off road Marathon.  I got to have some of this I thought so a quick e-mail application with a copy of my England Athletics registration got me entered (pay on the day 24 euros)

My running is limited to doing events as the knees won’t allow me to do the regular weekly mileage so I ‘train for the event’ by doing the event, so no quick times probably but plenty of enjoyment.

Ann and myself drove down on the Thursday and stopped overnight in the Maidstone Hilton before catching the 12 noon ferry to Dunkerque on Friday.  Stephen and Lesley Daglish had an early start from Consett and joined us in Dover for the same ferry so good company already.  When we got to Dunkerque we set off for a 2 hour drive to Albert for me and Amiens for Stephen (only 18 miles apart)  The third leg of our social click Mike Swainson and pal Bob texted to say they were leaving Metz and would join up with Stephen in Amiens later that evening.

By 5.30 we were in our campsite at the Velodrome, Albert and the tent rigged up.  Blow up double bed sorted, mains lighting, heater if required, satellite TV up and running, wine poured, I do spoil my girl!!

The next morning we were joined by Stephen, Lesley, Mike S & Bob.  The start and finish for all the runs and the walk was just a few hundred yards from our campsite so it was easy to recce the start/finish area. 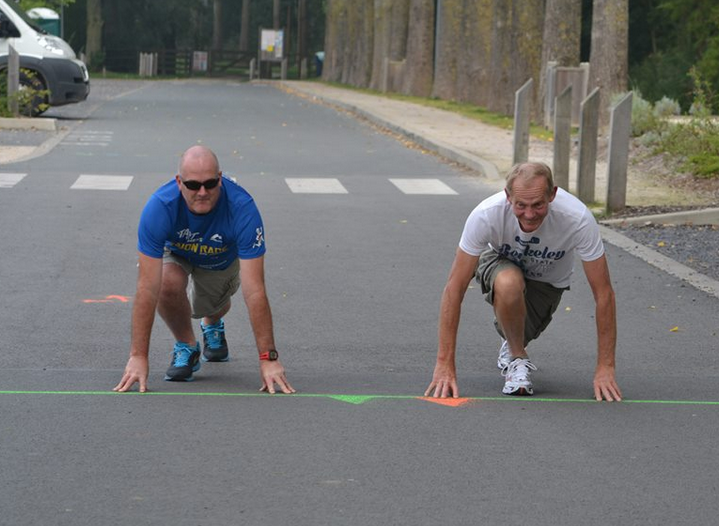 On offer was a Maratrail (26.2 off road) a half Marathon, a 10 and 5K plus a 6.75 mile walk.   At 10 am runners were invited for ‘a small jogging’ from the centre of Albert followed by a reception for foreign runners by the Mayor and other dignitaries in the TIC, nibbles and drinks provided.  Registration started at 4 pm so that left us time for coffee beer and wine and more socialising before we picked up our numbers.  The weather was wam and pleasant, the temperature only dropping in the late evening. 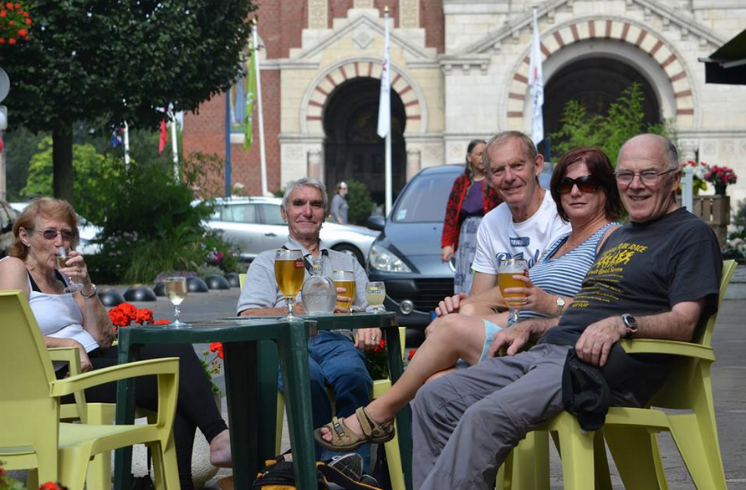 We had been promised an interesting run and it sure was. A flat start into the centre of Albert and then down into the underground tunnel network which housed artefacts from the first world war, weird hoofing it through the poorly lit tunnels. 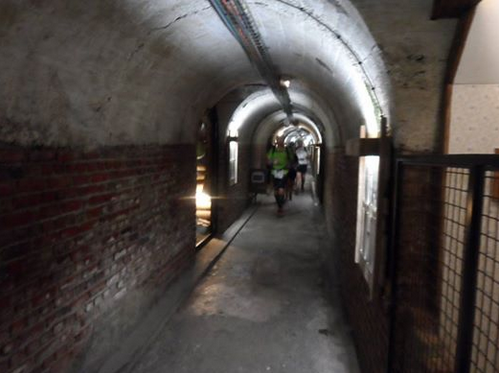 We popped out in a park by the river and worked our way through little used parts of Albert before hitting a long grassy bank beside the canal which led us out into open country.   With not doing any long runs before hand I started off cautiously as my only object was just to finish the run.  There was no major hills to climb but the whole area is undulating so it was constant up and downs, about 90% of the run was off road. At the 11 mile point I reached the Thiepval memoral, a huge edifice designed by Sir Edward Lutyens with the names of over 73,00 British soldiers who perished in this area and who have no known grave.  Very sad but a fine memorial.

As I ran out of Thiepval I spotted Mike S and Lesley with Union Jack flags hanging off his camper van, 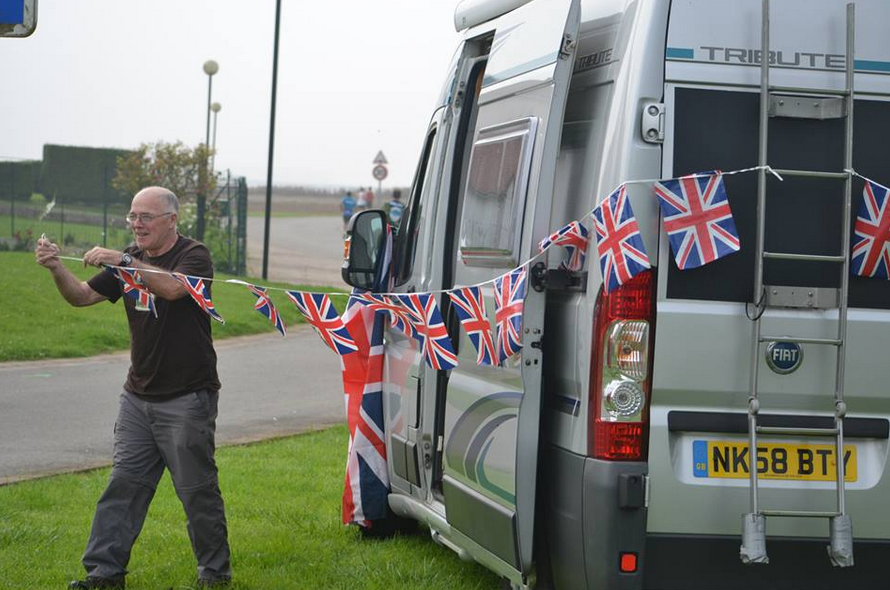 it’s amazing how a bit of support gets you picking up the pace.  Shortly after that I ran around the Ulster Tower memorial and paused to take a picture of ‘Tommie’ still guarding the front line since 1916, he ported arms smartly for me. 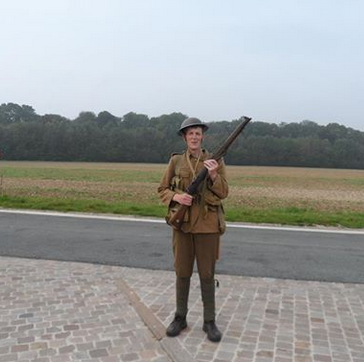 A steep downhill section followed before we had the reverse to do and a long pull up through ploughed fields, very uncomfortable to run over and the legs were starting to feel it. 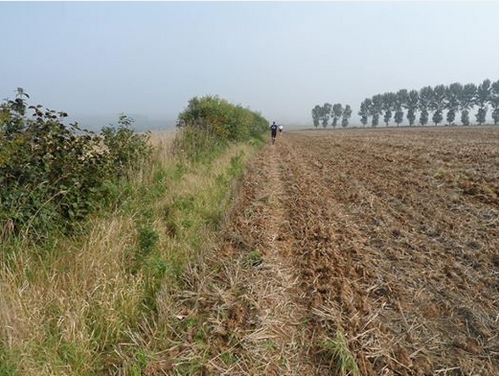 By now I had no clue as to how far I had ran or had still to go as my Garmin which had been iffy for a while had packed in and I had given it to Mike S as I passed him.

and then we had a river to plodge through for about 100 meters (the Frenchies threw a wobbler and most took off their shoes before entering the river, what’s that about!!)  Me I loved the chilled water so refreshing. 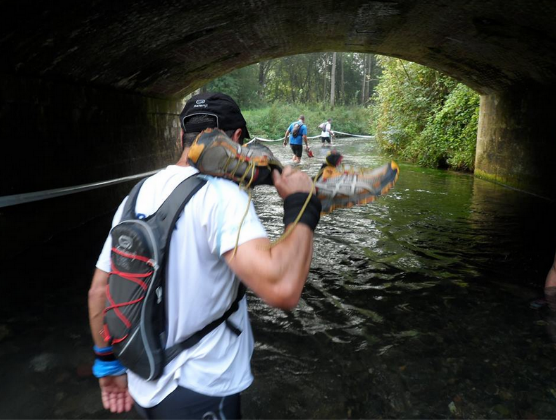 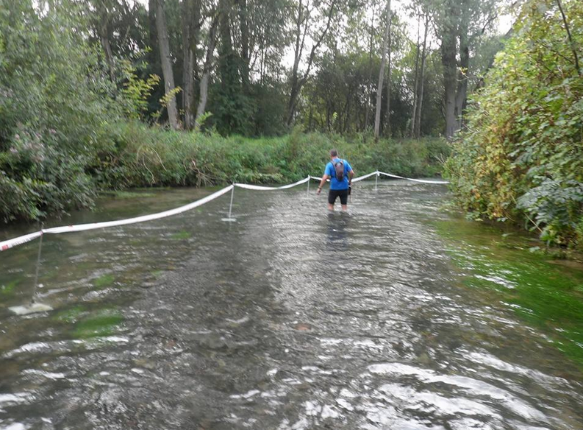 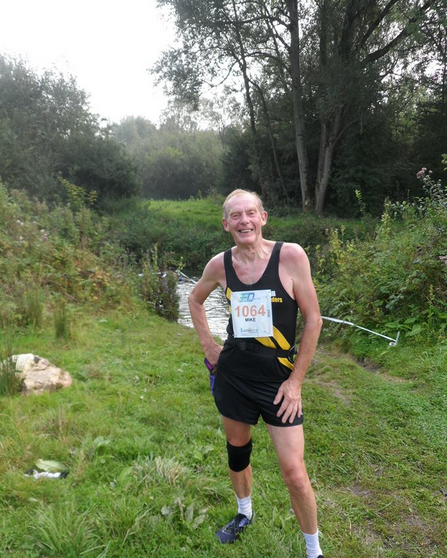 After the river we had a good bit working our way through woods, the route markings (orange paint on the ground) were brilliant apart from a couple of places when a group of us thought we had gone off piste but a cyclist who was supporting the group of runners I was with shot off ahead and returned after a while with a thumbs up, he had found a marker so we weren’t lost (I would probably have got the blame with my navigational reputation)

The temperature had risen and near the end and I started to dream of the cool beers & wines I knew were waiting for us at the finish.  Legs very weary now and it was mind over matter to keep pushing on. There was only 2 water stations on the way round, Thiepval at 11 miles and Auvley at 21 miles so you had to look after yourself for hydration. 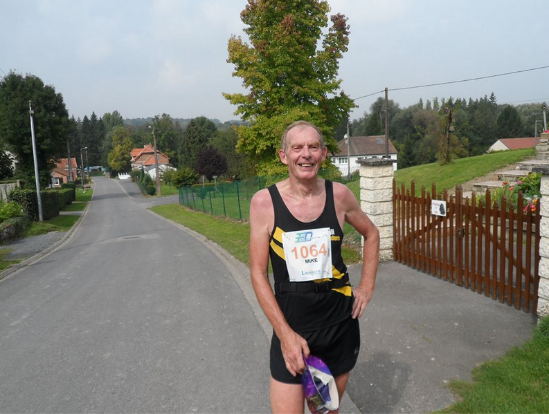 I turned into the finish area and broke into a 100 meter sprint which took me over the line (it’s amazing how you can turn the energy on for a short distance and look cool getting over the line but believe you me I was goosed)  A slow walk around the finish area to collect medal/t shirt and then a sight for sore eyes Mike S approaching with a ice cool beer for me.

Whilst some us had been running Ann and Bob had taken part in the walk (6.7 miles)

The finish area with table and chairs laid out under shade to sit at whilst you drank beer and wines was spot on, a bar b q sizzled away wafting delicious smells.  You put your race numbers into a cardboard box and young children drew out random numbers for a free ‘tombola’ there were prizes of garmin running watches, head torches and other running kit altogether a great family type atmosphere. 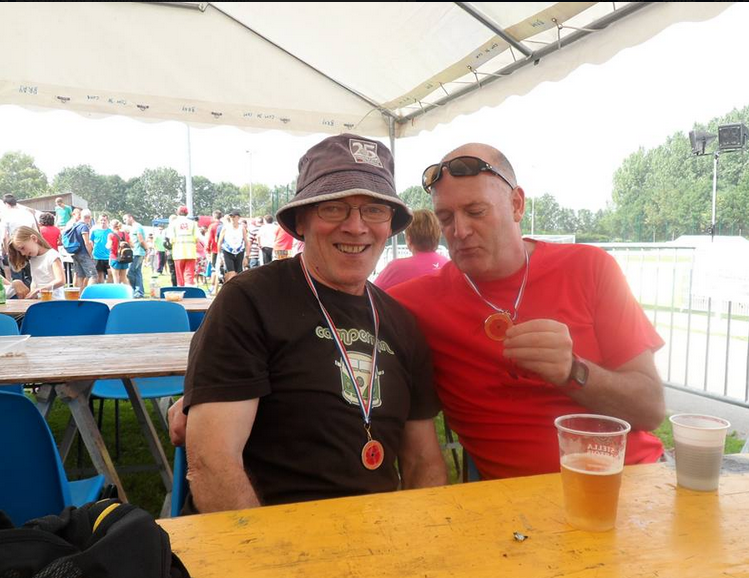 Mike S was asleep in his campervan, something about knocking of two and a bit bottles of red before 3 pm, nah I’ll not mentions that!!

After a while I popped back to the campsite for a shower and whilst I was there Stephen picked up my bling prize and thanked them in his best Geordie French. 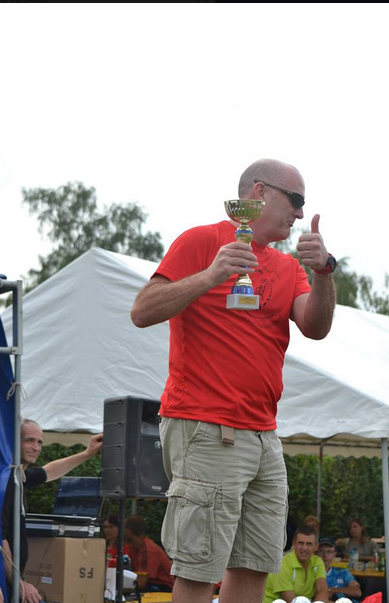 Stephen picking up the bling 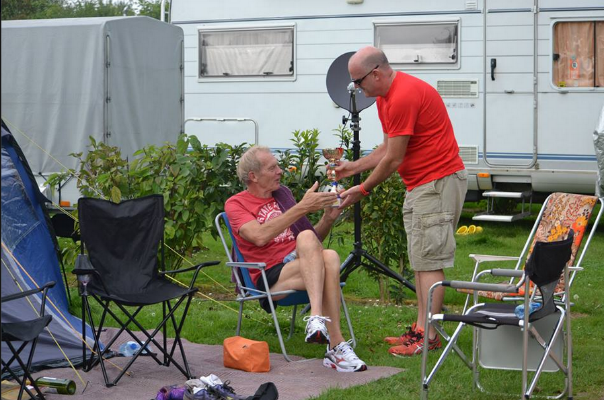 And representing at the campsite

Stephen and Lesley left for home on the Monday and the rest of us stayed until the Tuesday so more time to enjoy.

Well I hope this little blog might enthuse more Bounders to take the trip over to France next year to take part in one of the Poppy Runs.  You have a choice of Maratrail, Half Marathon, 10k, 5k and even a walk. 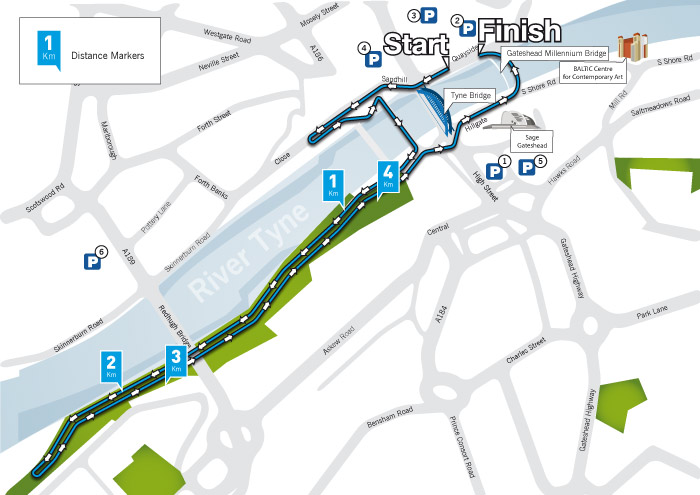 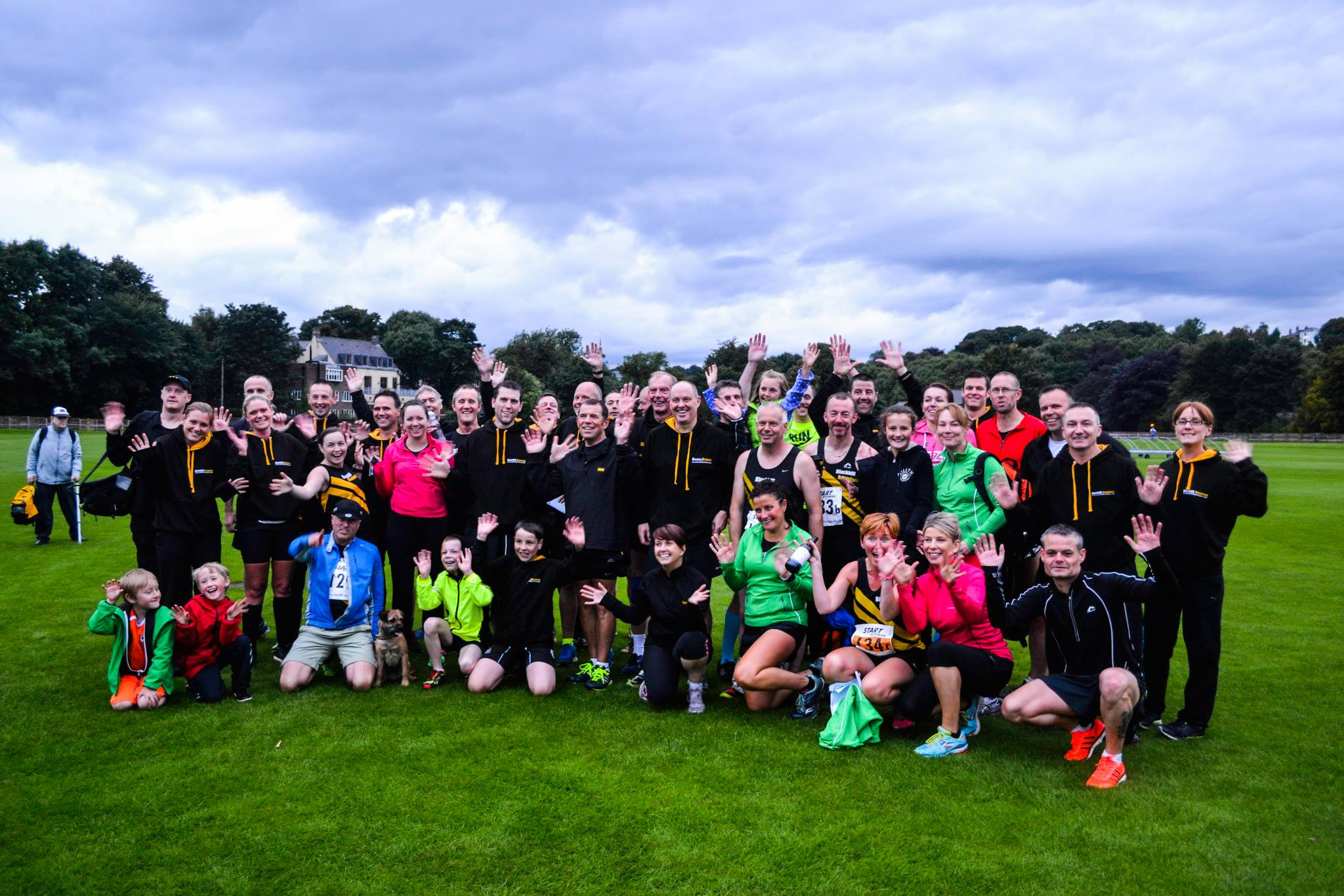 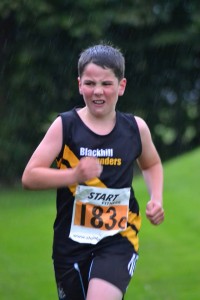 Some excellent performances from the Juniors and those that ran their 1st XC event in the Senior and Vet races. Some ran twice, got disqualified, ran late, ran in the wrong race or pranced down the hill like Bambi, but hey its all part of being a Bounder and the atmosphere and encouragement is second to none. Look forward to the next team event which is the Sunderland XC open on Sat 13th Sept so keep the date free details to follow. Thanks again