The Bounders have taken part in the Lowther Trail Run which has been part of the Lowther Show for many years. Initially discovered by Gordon Hindson it quickly gained a place in our running year. Lowther Show (just outside Penrith) is a large show initially held over 3 days Fri, Sat & Sun and the run used to take place on the Friday. The route then was about 60% on lanes and the rest off road. After 2 years where the weather washed the show out completely it ceased to be put on. Thankfully it is now back stronger than ever.   A 2 day event now over Sat & Sun with the run being held on the Sunday.

My day started with a dreek prognoses for the weather due to the tail end of hurricane Bertha heading towards the UK. Sure enough it was wet and stayed wet for the whole day but the forecasted high winds didn’t appear and the temperature at 13/14 was ok with no wind to chill you. The initial instructions were clear and precise and guided us into the Lowther estate and to a reserved car parking right next to a large marque which was race HQ and also looked out onto the carriage driving arena where we had a grandstand view of the magnificent horses and carriages going through their paces.

We had got there with over an hour to spare so registration was quick, number put on, a dibber fastened to your wrist for the 2 checkpoints later to be encountered. The rain continued pouring down as the runners gathered. A fit looking lot I must say with a good lot of females running. They all had the lean mean look if you know what I mean.

Given the wet conditions we were asked at the briefing to carry a waterproof and not to depend on others if in trouble. A simple whistle and we were off from in front of Lowther Castle. 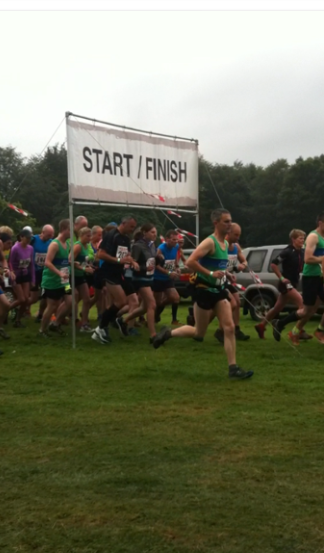 The first bit was a downhill clatter over the meadow in Lowther Parkland, a sharp turn at the bottom before tracking the river, crossing a bridge and then the huffing and puffing started as we pulled up through Askham Village and onwards up the fell to Heughscar Hill. (Fab view of Ullswater below) We then changed to a southerly direction as we descended to the Cockpit. By then I realised that today wasn’t going to be a fast run for me, my legs were very heavy from the previous days hard hilly cycling sportive at The Hell of Hexham. So I mentally readjusted and decided that today was going to be for enjoyment only. Felt good after that decision.

The run was billed as a Trail Run but in truth it was more a Fell Run with only about 2 of the 13 miles being on road. We had a stream to plodge through, the girl running next to me asked ‘is this the river crossing?’ fraid not I replied. That came a little later as we had to wade through the River Lowther which was about knee deep (with a safety line rigged up for the nervous) That was good, wet feet matched the wet rest of us!! Shortly after that we got our comeuppance when we had to haul ourselves up Knipe Scar. Yes I walked up it….didn’t see the racing snakes at the head of the field but I comforted myself by agreeing that they too couldn’t have ran up that could they?

At that point most the graft was done and after some undulations over grassy bits we started a long descent back into the Lowther estate. I had half a mile of climbing through some woods and out I popped by the Castle itself and trotted over the line feeling rather smug with myself as it was all over. Still chucking it down but not cold.

This run is one to bring the family over to as Lowther Show has loads going on and would keep everyone from children to grownups well occupied all day. Your £10 race entry gets runners into the show free and you can purchase discounted tickets for extra people when you enter the race (sorry run)

Despite the rain Ann and myself had a great day out and I even picked up the Gadgy prize, a nicely engraved crystal tankard courtesy of sponsors Isuzu. 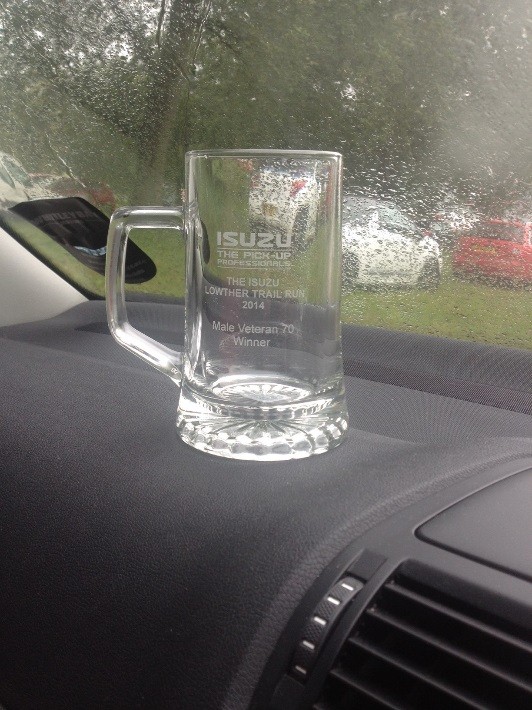 As the race organiser said at the end he was very pleased to see an increased number running (about 80) and to spread the word for next year. Word spread Bounders put the Lowther Trail Run in your mind for next year.